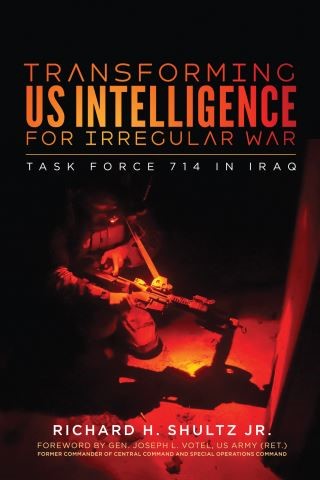 Transforming US Intelligence for Irregular War

When Joint Special Operations Command deployed Task Force 714 to Iraq in 2003, it faced an adversary unlike any it had previously encountered: al-Qaeda in Iraq (AQI). AQI’s organization into multiple, independent networks and its application of Information Age technologies allowed it to wage war across a vast landscape. To meet this unique threat, TF 714 developed the intelligence capacity to operate inside those networks, and in the words of commander Gen. Stanley McChrystal, USA (Ret.) “claw the guts out of AQI.”

In Transforming US Intelligence for Irregular War, Richard H. Shultz Jr. provides a broad discussion of the role of intelligence in combatting nonstate militants and revisits this moment of innovation during the Iraq War, showing how the defense and intelligence communities can adapt to new and evolving foes. Shultz tells the story of how TF 714 partnered with US intelligence agencies to dismantle AQI’s secret networks by eliminating many of its key leaders. He also reveals how TF 714 altered its methods and practices of intelligence collection, intelligence analysis, and covert paramilitary operations to suppress AQI’s growing insurgency and, ultimately, destroy its networked infrastructure.

TF 714 remains an exemplar of successful organizational learning and adaptation in the midst of modern warfare. By examining its innovations, Shultz makes a compelling case for intelligence leading the way in future campaigns against nonstate armed groups.